Posted by Squamish Climber on Thursday, July 3, 2014 · Leave a Comment 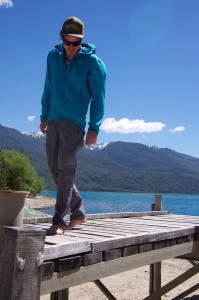 Along with Squamish Access Society president Jeremy Smith, Marc-Andre Leclerc is headlining the locals’ evening at the Squamish Mountain Festival. Squamishclimbing.com recently caught up with Marc to get a preview of what he might be talking about at the festival and what else the young Arc’teryx athlete has been getting up to in the last few months.

The short answer on the second topic is “plenty”. During the winter, Marc made his first trip to Patagonia, combining two back-to-back sessions with different sets of partners. With Jason Kruk, he wrestled classic terrible Patagonia weather and objectives around the Torre massif. Then, with Paul McSorley, Will Stanhope and Matt Van Biene he ventured out to an unclimbed wall in the little-known Rio Turbio valley, where the approach seems to have been as sketchy as the climbing. After that, a US road trip. In Yosemite Marc tried for what he calls the “half-pipe”: soloing the big faces on Half Dome and Mount Watkins in a single day. Now he is home in BC for the summer season.

Currently Marc is best known in Squamish for freeing the A4 aid line, Last Temptation of St Anthony, on the North Walls. Though he had sent most of the route several years ago, including the physical crux, an overhanging 5.13 flake, the most serious of the original aid pitches held out until October last year. Chris Geisler had climbed this off-vertical face pitch almost entirely on skyhooks with just three bolts and Marc wanted to respect that lead by freeing the pitch without any additional drilling. Though ex-Squamish-resident Sonnie Trotter estimated 5.13 after a top rope ascent, Marc compares the difficulty to some of Murrin Park’s 5.12+ crimpathons, though with vastly more risk: “like soloing Vorpal Sword or leading Mata Hari with one bolt”. Falls up to a hundred feet are possible from the pitch.

Though obviously capable of incredible focus in action, Marc comes over as extremely laid-back away from the rock. He says he dislikes being too structured about training or projecting routes, and prefers spontaneity and keeping climbing fun at all times. The big lead on Last Temptation was wholly unplanned. He had been up on the route alone working moves and was about to strip his fixed lines from the route before the winter, when his girlfriend jumared up from below to offer a belay if needed. Though conditions were not ideal, with a very strong side-wind, some instinct told him that this was the moment to try the lead … no doubt Marc will finish the story in his presentation at the festival. This year he is working at freeing the Raven, another old aid route on the North Walls. Like Last Temptation it involves significant face climbing rather than being a standard Squamish crack and corner line, but he doesn’t think there are any “R” or “X” leads to negotiate.

Marc’s other multi-pitch addition to the Chief last year was Labyrinth on the Tantalus Wall. This evolved after a rope-solo of the aid route Wrist Twister, which the new route criss-crosses on various dike features. Marc and partner Luke Neufeld tackled the route ground-up, cleaning and bolting on lead. Both took long falls after blowing hooks whilst drilling.

This spring in Indian Creek he attempted the infamous 5.13 R Air Sweden ground-up, taking falls up to fifty foot. He ultimately failed to send, but feels his attempts were more rewarding than if he had top-roped the route as most people do (the anchors are easy to access via a 5.11 crack pitch) then made a lead that would have had no uncertainty.

It might seem like Marc is making ethical statements with some of these ascents. But hearing him talk about them gives no impression at all that he wants to prescribe how other people climb. For him climbing is very personal, and playing with strict rules is his way of maximising his own experience. But come judge that for yourself: Marc’s presentation is on the 16th.