Posted by Squamish Climber on Wednesday, February 15, 2012 · Leave a Comment

As far as big, bold climbs go, you can’t get much bigger or bolder than a new route on the Southeast ridge of Cerro Torre in Patagonia. The featureless face on the near-perfect granite spire is permanently etched by Cesare Maestri’s infamous bolt line. And as far as climbing controversies go, you can’t get much hotter than the international conflagration burning over the chopping of Maestri’s 42 year-old bolts.

This is why the spotlight is on Squamish climber Jason Kruk and his American partner Hayden Kennedy. Squamishclimbing.com recently sat down with Kruk to get the full story on their controversial climb and the international row over the right of foreign climbers to rip out established bolts. 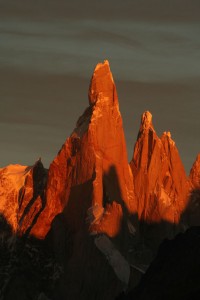 In 1970, Maestri used a gas powered compressor to drill more than 400 bolts up the Southeast Ridge of Cerro Torre. The Compressor Route, as it became known, was widely considered an artificial climb and a hollow claim of alpinism, much like the Italian alpinist’s claim that he climbed Cerro Torre in 1959. That climb was debunked when later expeditions failed to climb the route and found no evidence Maestri had climbed more than a quarter of the way up the mountain. More recently, there is growing suspicion that Maestri came up short on the Compressor Route too. He claimed he reached the summit after climbing to the top of the headwall. He stopped below the rime ice on the summit saying it was “not really part of the mountain” because “it’ll blow away one of these days.” But his true high point may have been just above where he left his compressor as his bolts peter out completely 20 metres from the top of the headwall.

In the last few years, the prize had been to climb the Compressor Route in the best style by eliminating as many of the Maestri bolts as possible. The goal became known as the “fair means” project. Kruk age 24,and Kennedy age 22, bagged it when they used only five bolts from previous fair means attempts and two of Meastri’s anchors. They graded the climb 5.11+ A2. Then, when the pair reached the top, they went down removing 125 Maestri bolts along the way. 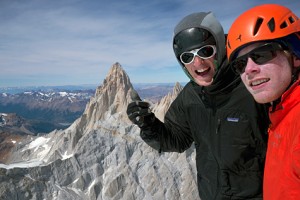 The news went viral that the Compressor Route had fallen to a fair means ascent, and Kruk and Kennedy had chopped the bolts. Likely more than a few tons of green house gases were burned debating if what they did was justified. Some vilified Kruk and Kennedy saying they had no right to remove the bolts. A few called them names, comparing them to terrorists and referring to them with the initials KKK. Others stood by them, saying it was about time the widely condemned bolts were removed.

“The first time I saw Cerro Torre I had to sit down. It takes your breath away. It’s the raddest peak on the planet,” says Kruk. At 3,128 m (10, 262 ft) it’s not the height of the peak that makes it so striking. Surrounded by lesser spires, Cerro Torre rises straight up out of the glacier and narrows to a small summit capped by a mushroom of ice.