So all this wet weather has started to creep into the psyche and commentary of the Squamish Mountain Festival. Ed Cooper in his excellent presentation showed some slides of Squamish climbing under beautiful blue skies and says he doesn’t know what people are saying that the weather in Squamish is terrible. Thanks Ed, it was good to have a reminder that the sun can shine in Squamish even though those photos were taken 50 years ago.
Well, there is good news on weather front for Sunday, the rain is supposed to diminish to the chance of a shower and the sun may even make an appearance!
As I said, Ed did a great presentation, showing some slides of his and Jim Baldwin’s first ascent in 1961. He’s also made a great contribution to retaining a bit of the history of Squamish climbing by painstakingly restoring some of his old slides. He says some of them had turned magneta, had mold growing on them and had lots of scratches, but with Photoshop he turned them back almost to their original condition. — Thanks Ed for your efforts. 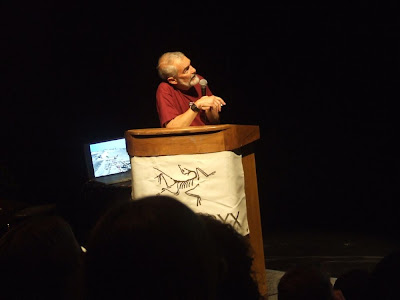 Ed recounted some of the stories of making the first ascent of the Grand Wall. He remembers the huge media story it was back then and how a reporter miss-quoted him by writing he and Jim sucked moths to quench their thirst instead of sucking the water out of moss.
There was also a little nod to the contribution this first ascent made and climbing in general does for the city. Squamish councillor and former mayor, Corrine Lonsdale says the climbing community has done a lot to put Squamish on the map and she thanked the efforts of the FMBC for saving Smoke Bluffs. Lonsdale, who grew up in Squamish remembers when Ed and Jim were climbing the Chief and how everybody wanted to watch to see if they would fall.
And in Ed’s recounting, there are a couple of times that easily could have happened such as the time his rope came untied while leading the Split Pillar.
At the end of the presentation, Anders Ourom, a long-time climber who is writing a coffee table book on the history of Squamish Climbing got up to recognize Ed and Jim’s contribution as well as the place several other climbers have in the development of climbing in Squamish.
Here is a photo of some Squamish Climbing pioneers from left to right, Richard Strachan (FA Snake and Clean Corner, 1962), Ed Cooper FA, Grand Wall, 1961, Dick Culbertson, FA North Gully 1958 and guidebook author of Coast Ranges and Glenn Woodsworth, FA of University Wall 1966 and first guidebook of Squamish climbing 1967. 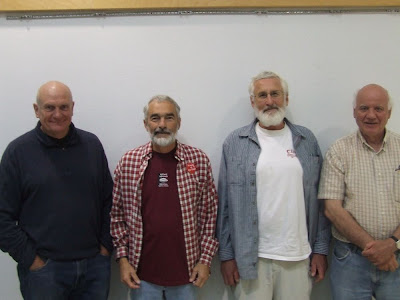 The next presentation after Ed was a complete change of pace as Tim Emmett took us through some of his exploits from hard sport climbing, DWS and base jumping. There’s a good story of how Tim met then married a local Squamish girl by actually falling out of the sky from a base jump and virtually landing on her at a beach in Thailand. 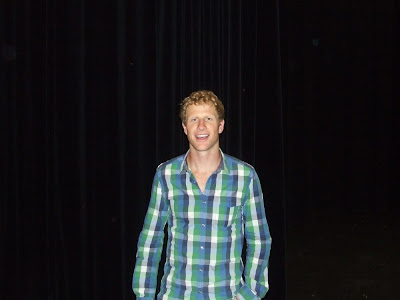 Tim Emmett at SMF
Some of us still had some energy at the end of this to rock and dance at the Robot Disco party. Props to the climbers who got it together and dressed the part. 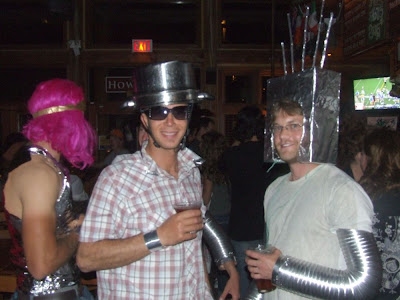