Some people may have noticed that the central part of Halfway House has been a construction site for a while. I have been quarrying away there sporadically since last fall and finally have a line sent. Grade is about 12a, maybe harder. Pumpy side-pull/ gaston/ drop-knee fun to obvious twin anchors on a slab at about two-thirds height. No name yet.

The attraction of this sector is that the rock is continuously overhanging to half-height then capped with more overhangs, so it stays dry in the rain. On the negative side, it started out very chossy, and has required a lot of cleaning. Some patches are still sounding hollow so the bolts are tightly-spaced and belayers should wear helmets for now. I don't think it is any worse than the Circus at Chek would have been pre-traffic, but time will tell. There is also a mystery seepage patch right at the base, so the first ~3 metres are notably rotten. I have bypassed that with a combination of a raised "patio" and cheat log ...

I plan to add a line to the left, which will be more bouldery but less sustained, and also continue the original line to the top, which will add some steep and exposed moves but probably not change the grade.

Thanks to Travis, Todd, Marie and AndyR for help.
Top

What is the length? 15 meters? What is your call on route quality (2-3 stars?)? Have you tried Compromise Direct?
DJ 1%
Top

About 15m, but the last few metres are easy. The overhanging section is slightly shorter than on, say, Rug Munchers, but steeper and a little harder. I am reluctant to talk about quality ... I find it hard to be objective after crowbarring so much material off it. When I redpointed it, I was simultaneously thinking: "this is fun!" and "surely one of these holds will break?".

I have done Compromise, not the Direct.
Top

4 of us ot on this today. Consensus between us was 11c. Fun little route broke off a fair amount of small - medium rocks.
DJ 1%
Top

Climbed it yesterday. Worth getting on for sure. I would say the grade is in the 11+ range not 12-. I'm not sure I'm the best shape to say either 11c or 11d. On another note, there was not very much loose material coming off the wall when I was on it. Maybe it's getting close to ending it's shedding process.
Top

Yeah it is starting to look quite solid now.

I have added bolts to the left-hand line and hope to complete it this week. I also looked again at the extension through the top roof. It is climbable but there's a very large block that may need removing that will requires some more serious equipment than my crowbar.
Top

OK, both lines are now complete to mid-height and have had multiple ascents, so there's some grade consensus.

Don't Mention The War 5.11b 5 bolts
Bouldery start into a fun juggy roof, then easier terrain.

I'll sort out proper chains for the anchors in the next week or so.

A couple of crappy photos from my cellphone:

Fawlty Towers now extended to the top through the obvious stacked overhangs. No change in grade, though definitely a better route. Steep! Needs 14 quickdraws.

The "cheat log" has been replaced with a "cheat patio".

I hope to add 2-3 more lines to this cliff and have been clearing vegetation at the base with that in mind.
Top

The obvious line just left of Compromise Direct is now The Impasse. 5 bolts (stick-clip the first one). Very bouldery off the ground to a rest, then weird movement up and out of the groove. I have no idea of the grade. It was quite a fight for me, but my sequence may have been dumb. High 11, low 12?
Top

Another addition here. Starts at the toe of the buttress down and right of the base of Sanctuary. Up past multiple overlaps until it is possible to traverse horizontally right (crux) into a rightwards-slanting groove that leads to chains. This point is about 5m left of the chains above Don't Mention the War. No name yet. 7 bolts. Grade maybe 10d/ 11a? I was hoping it would be a low .10 warmup but the traverse is quite awkward.
Top

I climbed the new 'no-name' route yesterday and would suggest 11a - the traverse is pretty tricky.
Also, I pulled a sizable chunk of rock off at the last bolt but thankfully the traversing nature of the route meant that belayer didn't get conked.
Top

Another update on this wall. Five routes now:

4a extension ... not shown ... keep going to the top through steep ground past 5 more bolts to an airy top-out. No difference in grade. The final anchors are not well positioned at the moment - I will be moving them.

5. The Impasse 5.12b 4 bolts
Just left of Compromise Direct. Stick clip the first bolt. Tricky start, then weird movement up and out of the groove.

Grades for 1 and 2 are my estimates; for 3,4, and 5 I have used Marc's from the Squamish Select Update PDF.
Top

tobyfk wrote:4a extension ... not shown ... keep going to the top through steep ground past 5 more bolts to an airy top-out. No difference in grade. The final anchors are not well positioned at the moment - I will be moving them.

Right ... I think I am finally done with this wall. Added one more route. See (5) below. Here's the full list and topo photo again.

4a extension ... not shown ... keep going to the top through steep ground past 5 more bolts to an airy top-out. No difference in grade.

5. Waldorf Salad 5.12d 6 bolts
Continuously steep climbing with a complicated bouldery crux past the fourth bolt. (There is a possible rest jug out right from the third bolt but it is hard to get back on the line after using it, so it doesn't help much.)

6. The Impasse 5.12b 4 bolts
Just left of Compromise Direct. Stick clip the first bolt. Tricky start, then weird movement up and out of the groove. 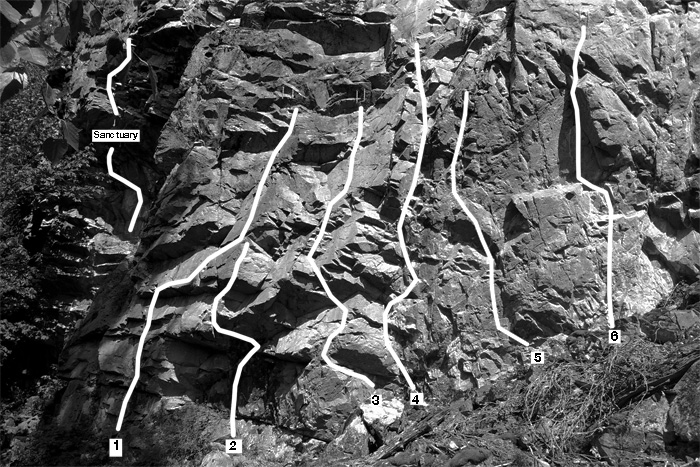 I know I have mentioned this before, but this wall really is very weather-proof. Waldorf Salad was sent during a hailstorm - the rock was bone dry. Earlier in the year Chris H and I hiked in to the cliff through deep snow all the way from the parking lot - similarly the rock was totally dry. The key factors are that it gets lots of afternoon sun, there are no trees only a large area of open talus under the cliff and the top overhangs shield the lower wall from any rain.
Top
Post Reply
15 posts • Page 1 of 1