Judy Komori sent Squamish Climbing another topo of new climbs. These climbs are at Tunnel Rock in Smoke Bluffs and look like a bunch of nice moderates. 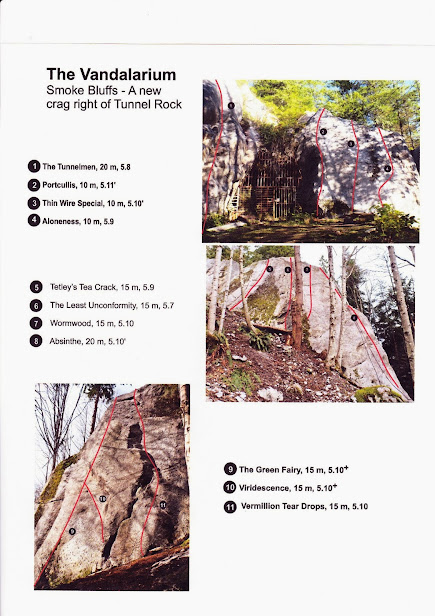 hi Dave the routes at tunnel rock have been the source of big problems for the bluffs . when robin climbed the routes he chose to place single staples as anchors on the climbs ,these where chopped the park replaced them with stainless steel rap rings, robin then chopped 7 sets,at present non of the routes now have any anchors.
Top

Thanks for clarification. I was unaware of the situation there. I support the BC Parks’s Best Practices Guide For Rock Climbing Route Development in Squamish Area Provincial Parks which the municipality adopted for Smoke Bluffs.
Dave Jones - site admin
When you reach the top, keep climbing -- Zen proverb
Top

Squamish is actually behind the times on best standards practices. Don't dismiss glue in's,they are actually stronger than expansion bolts.

Until someone actually speaks with Robin about his methodology, chopping his anchours is retrogressive and doesn't support good practices, it only inflames an already combative situation.
Top

Hi Rolfr,
I'm a little surprised by your comments.
Many people have spoken to Robin about his methodology.
Many of his practices are quite clearly listed in your link as bad. (Chain links on bolt heads, incorrect glue, incorrect spacing of u bolts etc) as well as general climbing etiquette including, single point anchors, squeezing routes, inadequate cleaning, eye balling routes etc

If Robin followed the advice of the article you linked, used "glue ins" the way the article describes and followed some basic best practices there would be little to no objection from the Squamish community.

He has made a huge contribution and I personally like chatting with him but when his practices are sub-par and in a municipal park they should be chopped and replaced. He is also involved in retaliation chopping against people whom have not touched his work.

It is his lack of ability to compromise, discuss and work towards an amicable solution that inflames the situation.
Top

I watched the videoS at http://www.upskillclimbing.com/2009/02/ ... ot-to.html and they make it clear that they are evaluating different bolts in ** Soft Rock ** - Australian Sandstone, not granitic rock. Also one of the videoS noted safety concerns with glue-in staples in Sandstone.

Any news on routes without anchors?
Top

The crag is called the Vandelairium its areally cool addition to the tunnel rock area .All the routes now have good anchors ,I gave the crag a full clean up !all the routes with the exception of Aloneness which in its present state is real dangerous!!.The route is good but has no gear at all !!it requires 2 bolts.its not for me to add bolts to other peoples routes.Also during reclining i added 4 new pitches.the crag has some stelar moderate lines Moronhead 5/9,tetleys tea crack,5/9,and The least conformity 5/7 are highly recommended.In the 5 /10 grade Viridscence 10+ and vermillion Teardrops 10- are highly recommended.We are in the process of putting in a lower access trail,iwill have a new topo out soon for the crag hope this helps Hevy.
Top
Post Reply
8 posts • Page 1 of 1