Withthe forecast looking pretty crap for the upcoming 25th, 26th, 27th, there will likely be work going above Thriller on the Pillar. If there is active cleaning goign on, the whole area will be caution taped off and signage posted. Please stay out!


I am hoping to finish off the project indicated up and right of the pitch three on Wiretap. I am pretty stoked; it is shaping up to be hand crack with good exposure. This would mean you could potentially climb Thriller (10b-c crack), P2&P3 of Wiretap (as a single pitch at 5.9 crack), and about 30m more of likely 10.x crack. A total of about 90m of cracks.
Top

If the weather report sticks, and it is still forecast to shower this Friday, cleaning will be taking place on the upper Oleson Creek wall. If you see yellow caution tape blocking access to the general area, do not cross it as there will be active debris fall.

Update: there is but about 6-7 meters of crack and route to finish cleaning. After one more dusting of the whole thing, it should be in shape to climb. After the previous days cleanign it is looking like it might be 10.b ish. If one is keen to see the line, there is a photo post of someone climbing Wiretap in the Wiretap thread (taken from Slot Machine). There is a tree obscuring much of the route, but you can make out the mossy green crack line that branches off of the top of the third pitch and arcs its way up the cliff face.
Top

damien wrote:If one is keen to see the line, there is a photo post of someone climbing Wiretap in the Wiretap thread (taken from Slot Machine). There is a tree obscuring much of the route, but you can make out the mossy green crack line that branches off of the top of the third pitch and arcs its way up the cliff face.

Here it is now! 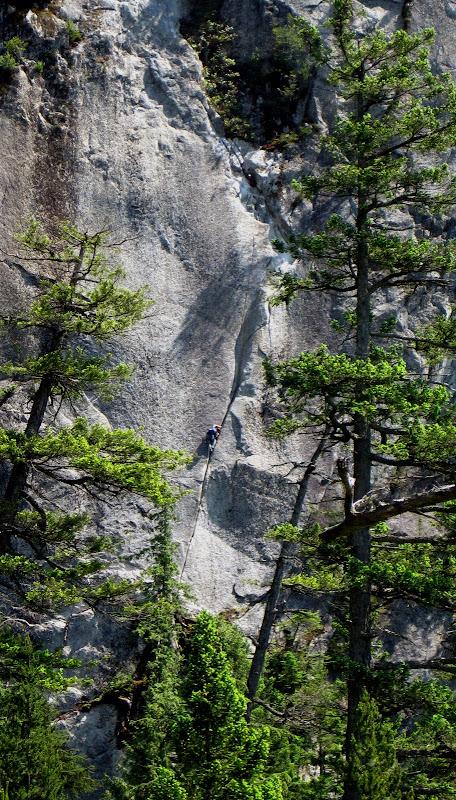 I have traced where the route goes. It is not done yet...but close.

A climber is visible working their way up 3rd pitch of Wiretap.
Top

UPDATE: The cleaning is all done for this pitch. I will post the estimated grade and updated topo once I have actually climbed the pitch...


I also dusted off any crud I dropped into Wiretap, Rumble, and Eavesdrop
Top

I drooled over this looking at the crack from from slot machine...then went over to Olsen creek but respected the red tat: any idea when you'll open it?
Top

Not sure exactly. I am trying to track down some hardware (Fixe rap anchors are hard to come by these days = go figure?!). The route needs some final tweaking ( a bolt and rap stations), so you can climb from the stump up to a ledge belay in a single 25m pitch. Then climb the final 30m pitch. It all goes at about 5.9. and will make a 3 long-pitch 5.10a from the base (wiretap and this newer bit) I will set up a new rap route to get down while not bunging up the wiretap leaders. This may also reveal some other neat climbing terrain. All in all, I it will be 10days or so from now, maybe sooner.

Thanks for not drooling on the cracks above the red tape!

I also go an up close view from wire tap last night, looks like a fine alternate route/addition to the cracks below. Thanks for all the hard work!

Git 'er done before they park a gondola tower on it!
Top

1) There is no rap route for this climb currently. And since what goes up must come down DON’T climb this pitch! You will get stuck up on the cliff face.

2) Spent the afternoon putting the final touches on the new pitches and making sure that Wiretap was pristine.

3) This new climb will have its own rap route. I thought it would be done yesterday, so I pulled the red tat and began bolting in the descent. THE RAP DESCENT IS UNFINISHED. Turns out there are some loose logs and rocks, which make the descent unsafe, and we could not safely remedy the problem on a sunny Friday. I was unable to re-place the red tat. Please standby for further updates. It will be well worth the wait.

The topo and climb info can be found in the Wire Tap thread.
http://squamishclimbing.com/squamish_cl ... 7&start=90
Top
Post Reply
12 posts • Page 1 of 1

Users browsing this forum: No registered users and 6 guests