Everything and anything to do with climbing in Squamish.
Post Reply
28 posts

Lots of action going on at The Little Smoke Bluffs lately, new zones, new routes, new lots being developed, also some zones are getting re cleaned, a play ground is being added and there is still lots more potential!

Some of the new zones include;

-A highball bouldering area above neat and cool; accessed by heading up the loop trail towards pixie corner and taking a left on a climbers access trail adjacent to the western Pennylane access gulley. Lots of fun climbing to be had there, thanks to the cleaners, you guys did an awesome job!

-A kids zone to the right of neat and easy/clean starts, work in progress by the Smoke Bluff Committee.

-The recently cleaned lower stage of Lumberland, now has a second stage being cleaned above it, courtesy of Hevy Duty and friends. Lots of time going into that area and what we're left with is a beautiful crag.

-There is also a retro scrub going on down at Burgers and Fries south, cleaning up all those worthy cracks that were covered in moss.

-At Pennylane west (top of the access gulley) there is a nice short diagonal 5.10 crack with a little boulder problem at the top that has been recently recleaned. Also a new 5.13 slab route beside Up Up and Away put up by Marc Leclerc called 'Total Obsession', I believe.

Also at Pennylane east there has been some new stairs constructed in loo of the deteriorating gulley. These can be used to access Ronins Corner and Fern Gulley, as well as the top of Pennylane.

In other news the two lots at the Hospital Hill entrance of the bluffs have been sold and appear to be in the midst of development, so all you parking poachers beware.

Also at the Hospital Hill entrance is where the new childrens play area is planned to be erected, I'm not sure what stage the Smoke Bluff Committee is at with that, but wouldn't mind seeing the plans(hopefully it has a climbing theme with originality).

And finally, I'm starting a crag renewal project at Respirator rock, at this point I have yet to find anyone else interested in helping so its slow going by myself, but If anyone is interested in donating time and/or static rope to the cause drop me a PM.
Imaging how much funner this could be with booze and explosives
Top

Thanks for the update, I was up there in mid-Dec and noticed some of these developments as well. High five's to route cleaners for the new routes and rescrubs. I ran into Hevy Duty (aka Alan Stevenson) that day as he was finishing a day of work on Lumberland. From the looks and sounds of it that crag is going to be a compact collection (15+) of great moderates from 5.7 to 5.10+ . I hope Marc and Kevin will be able to get them into their new guidebooks coming out this year. 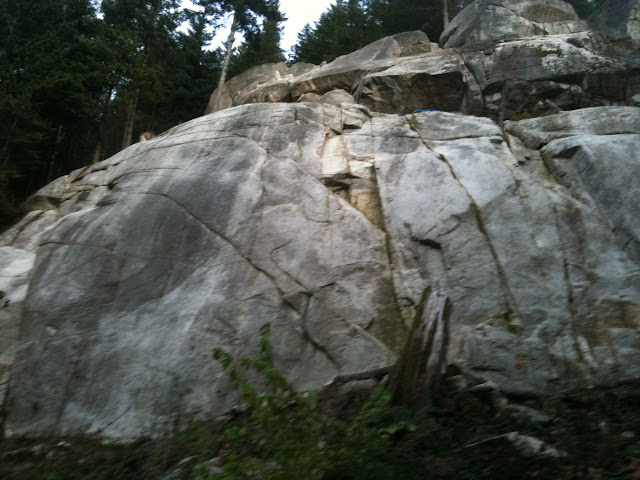 And this is Lumberland right side 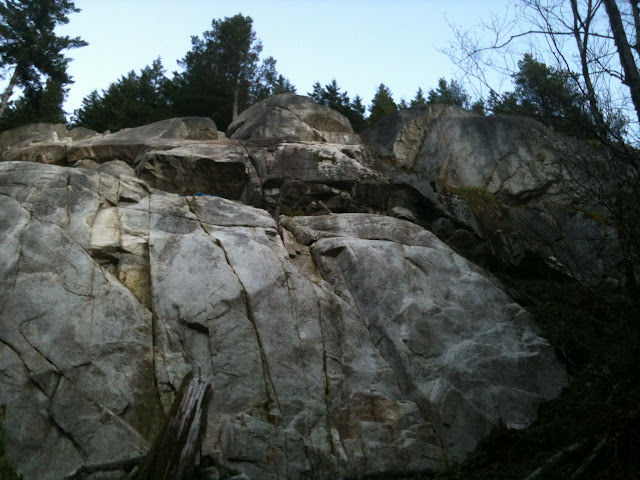 If you haven't seen the video of the trundle by Hevy on Lumberland it's worth a look.


Is that a shot of the highball above Neat n Cool I saw on your blog thekidcormier.blogspot.com? Can you post up any photos?

As you mentioned the Smoke Bluff Park Advisory Committee has spearheaded some great improvements. Here is a photo of the stairs in Penny Lane east gully. Again sorry for the low light and quality of the photo 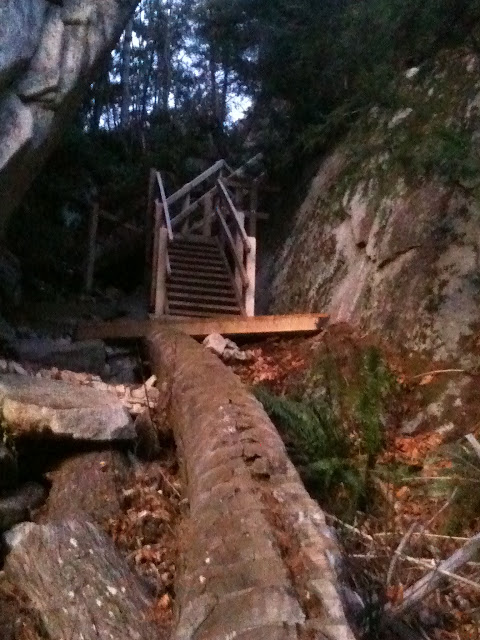 This is going to make a great way to get to Ronin's Corner and upper tier climbs. At the top of these stairs there is a nice well-signed new trail above Penny Lane which makes a pleasant loop back to Pixie Corner.

Remind me again where Respirator rock is. Sounds like a good project. Keep up the good work. As you said there is a lot going in the Bluffs. If anybody can provide updates on other developments or the status of the Zip please post up.
Dave Jones - site admin
When you reach the top, keep climbing -- Zen proverb
Top

Respiration Rock is the crag with the roof just south of Octopus Garden. Last cleaned c. 2003, grew over again since.
Top

Saw a group of diggers hard at work at Cabin Boy Office Crag today (area between Krack Rock and Zombie Roof) in case you're wondering.
Top

I've been wanting to clean up Respirator Rock for a while now, but lacking on time, motivation, etc. Those moderate roof cracks have always peaked my interest, and I've been astounded at how much moss has grown over that 5.7 crack next door. There is a pond there most of the spring and it keeps the air pretty moist near the rock. Anyone opposed to a little thinning out of some nearby trees / vegetation to let in some more sun?
Top

I would suggest you check in with the Smoke Bluff Park Advisory Committee before undertaking any vegetation removal as they have a policy on this. Several climbers are on the board and chair the committee.
Dave Jones - site admin
When you reach the top, keep climbing -- Zen proverb
Top

squamish climber wrote:I would suggest you check in with the Smoke Bluff Park Advisory Committee before undertaking any vegetation removal as they have a policy on this. Several climbers are on the board and chair the committee.


The committee doesn't seem to advertise a way of getting a hold of themselves; that being said, a rather thorough thinning of a few cedars has already taking place with respect to the best practises guide, and the best interest of the smoke bluff park and the climbing community.
Imaging how much funner this could be with booze and explosives
Top

"Selective clearing of trees along the base of crags, and regular cleaning of vegetation and debris from the individual climbing routes, is necessary to maintain and enhance these natural assets for climbing."

The vegetation maintenance that was done was limited to pruning branches from cedar trees, and thinning a few smaller cedars with very little live crown. This should help allow better airflow around the crag and slow the growth of moss, while maintaining the existing setting of the crag and nearby loop trail. Some clearing of salmonberry shrubs within 1 - 2m of the base of the crag was also done to allow easier rope flaking and racking up. All debris was piled unobtrusively, away from the crag and loop trail. The work is ongoing, and 2 alders and a maple tree may yet be selected for removal. The moss is thick on the rock, and difficult to scrub off!

I'll try to post some photos for discussion / criticism.
Top

squamish climber wrote:I would suggest you check in with the Smoke Bluff Park Advisory Committee before undertaking any vegetation removal as they have a policy on this. Several climbers are on the board and chair the committee.

They are out of the office right now......... cutting down trees, scrubbing, trundling, etc. @ a cliff near you.


Good work on the respiration rock clean & thanks for finding it worthy enough to bloody your knuckles on- neat little cliff. No need to worry much about pissing people off with what you are doing in the bluffs. Just follow the examples of what is being done in the bluffs already- i think the ratio from what i can tell is minimum 2:1 -trees cut down to pitches cleaned. Stay within those boundaries & you'll be fine. Less shrubs @ the base = more **** in the next guide & salmon berries are too bitter anyways

some more new bouldering below lumber land too it appears a few short walls have been scrubbed.
Top

Thanks for the tips slopr!


The sun is back glistening of the southern facing rocks in the bluffs!

I took a swing by cabin boy boy office.. or whaT ever the heck that bluff is called, and there is indeed some extensive digging cleaning going on, that appears to be quite fruitful. In a neat little zone above the main trail close to the parking lot, It will be a cool edition to the area.

Also the two most southern climbs at burgers south have had their cleaning completed and the fixedlines are gone, thank you who ever dedicated their time to those, much appreciated.

On the topic of the lots sold at the upper entrance to the park, they are moving right along developing, damn I'm jealous my extra 500grand was tied up...

Its been two weeks since I've been to respirator rock to work, as I had been away for a minute. A pretty big job for one dude, but I hope to have it completed by mid april.

I hope everybody enjoys the sunshine over the next little bit!
Imaging how much funner this could be with booze and explosives
Top

Some photos of Respirator

Rockhttps://plus.google.com/photos/10458345 ... um37Y6A7gE
Imaging how much funner this could be with booze and explosives
Top

nice work on respirator, going to be a nice place to climb again. Is there some new moderate lines going in on the right as well? Thanks for the work!
Top

3 short cracks with 3 different styles 5.6-5.9 cracks to the right of the overhangs, I dont know If they've ever been cleaned since they were first ascent in '83..
Imaging how much funner this could be with booze and explosives
Top

gnarnaphobe wrote: I dont know If they've ever been cleaned since they were first ascent in '83..

Yes, they were fully scrubbed around 2003, although you'd never know it now because they grew over again in around 10 minutes.
Top

I'm behind the cleaning at the south end of Neat and Cool, "The Kids Zone". The SB Committee has been supporting the effort with veg. management on the ground. Matt Parker has been helping me on top. The area will host about 10 easy (5.0 to 5.6) short climbs, all designed for TR, and meant as a family-friendly area. My hope is to have the youngest possible climbers in Squamish to do the FAs (that is, 3 year olds) and name the routes after them.

I'm also working on a 3p, 5.8ish approach to Diedre. If you've driven from Squamish to Vancouver, you probably saw the diagonal crack of the 2nd pitch. Cyrus and George are helping out on this one...

With my efforts right now on the Apron, I'm looking for a helper for the Kids Zone. Anyone want to open up climbs for the next generation? I'd love your help. Please be in touch.