Everything and anything to do with climbing in Squamish.
Post Reply
15 posts • Page 1 of 1

I'm interested in it. I won't be around to grovel and explore up it for some time, but while I'm locked away in the wastelands of Edmonton I am occupying my imagination with whatever tales and history of Squamish wonderment I can find. I have only been able to come across nebulous descriptions of the story of the NW Passage, and only from a shady memory recall that it was one of the first routes done on the Chief, and I believe I recall (or assume, can't tell which) it involved Fred Beckey.

I am trying to scroll back through Anders' History of Squamish thread and see if I can find some more info there, but the Supertaco is a convoluted universe... if anyone can tell me more about the NWP I would be grateful.

"The classic big wall route on the face of the Chief" - Fred after the first ascent.

damn, that Dru knows everything!
Top

Little if anything about NWP in the "Climbing at Squamish in the 1970s" thread.

The route was done in 1965, by Alex Bertulis, Fred Beckey, Hank Mather, and Leif-Norman Patterson. Then called "the classic big route on the west face". It was front-page news in the Vancouver Province - then a respectable newspaper - when it was done. The Patterson family gave me copies of the clippings and photos from the climb, which if I had unlimited free time I would scan and post.

There are vague rumours of the climb having been repeated by Seattle parties, going back more than 30 years, and it wouldn't surprise me. Glenn may know more.

The start of NWP must overlap or be near one or other of the short routes to the base of and left of U Wall, and I believe that Drifters' Escape starts up NWP before breaking right. Maybe that route that Connie and Adam did is in the area, too?


Squamish Chief, Direct West Face. The curiosity of Vancouver climbers
about knee-deep tracks in the January snow to the base of the sheer west
face of the Squamish Chief turned to amazement when they saw ropes
hanging on the lower part of the 1600-foot wall. Alex Bertulis, Eric
Bjornstad and I had made cold, snowy sorties onto the beginnings of the
logical crack line and most direct route. We had always felt that the 1961
Cooper-Baldwin route followed a devious line that necessitated too many
bolts and that it ended too soon, exiting off the wall to the right some
200 feet below the summit. The tracery of the winter snowfall confirmed
our belief that the classic direct line, several hundred feet north of the
other route, should be possible largely with pitons. It ran straight up a
concave wall with good crack systems, then through an immense overhanging band to the smooth upper walls. The route seemed to offer piton cracks except on one vertical slab section on the upper walls. Our winter
progress was surprisingly good, for despite cold winds and occasional
snow flurries, the rock and even moss in cracks was normally dry. The
second pitch proved interesting, with a direct-aid traverse; this ended at
twilight with a rappel off the face in a blizzard. The next two pitches went
mostly free with two bolts in one slab. Here we cut brush and small evergreens with a saw. We climbed mostly on weekends and left ropes behind. Bertulis and Leif Patterson spent two separate weekends ascending the mean sixth pitch, with its mossy cracks and loose flakes, and the two above it, bivouacking each time on small ledges. The seventh lead went free, surprisingly, except for a few feet of aid; from below it appeared to overhang. The next pitch, the real crux, called for difficult “upside-down”
nailing on the badly overhanging band. The top of the lead overhung the
tiny base ledge by some 30 feet. Our team of four, Bertulis, Patterson,
Hank Mather and I, pushed through to the top on May 9, 10 and 11,
with two bivouacs and marvellous weather. We had actually begun to
prusik up our ropes with Jiimar ascenders at noon on the 8th but found
ourselves bombarded by rocks thrown off the summit rim by youngsters.
We retreated to form a posse to chase them away, On the evening of the
9th I placed six bolts on a flawless headwall and retired for the night,
returning to place six more in the morning. Patterson went up the pitch,
placed several more before we finally were able to get back to piton work
again. We then nailed under an overhanging flake system and up a difficult,
exposed dihedral. That night we bivouacked on a big ledge with
enough wood for a fire. We gorged on water and food and watched the
twinkling lights of the town of Squamish and car headlights, almost a
vertical half-mile below. The waters of Howe Sound, snows of the beautiful
Tantalus Range and Mount Garibaldi in the near distance completed
the beautiful setting. On the final day we traversed up northward along
a slide-off ramp, hauling our duffel bags behind us. Mather went up a
final pitch of very thin cracks, using a variety of tied-off pitons and two
ropes to minimize friction. About noon he got off the stirrups and onto
the slabs leading to the rim. Soon we were all hiking down the trail,
accompanied by local climbers and the press, who had come up to greet
us. It was a Grade VI climb.

If the moderators could clean up the lineation of the quote, and put it in quotes, that would be fine with me.

Beckey is the man
Top

A few years ago I considered investigating it for free climbing possibilities. A closer inspection and scoping from below and the side with binoculars revealed a vertical jungle that made even me wince.

We're not talking shrubs here. There are huge healthy cedars growing out of that overhanging corner system. Maybe it's better left with it's mythical aid route status. Cleaning it might make Europa look like a light brush-job!

My favorite thing about NWP was the Tami Knight cartoon from the late 80's or early 90's describing how to sandbag visiting Americans on our most "classic" of Squamish long routes. ("crux of the route: hauling the backhoe")

Anders Ourom wrote:If the moderators could clean up the lineation of the quote, and put it in quotes, that would be fine with me.

Good luck with that Anders. The new owner of the site seems to agree with the previous owners ideas about editing your own posts

This silly topic has been beaten to death for the last three years.

Cloudraker wrote:Beckey is the man 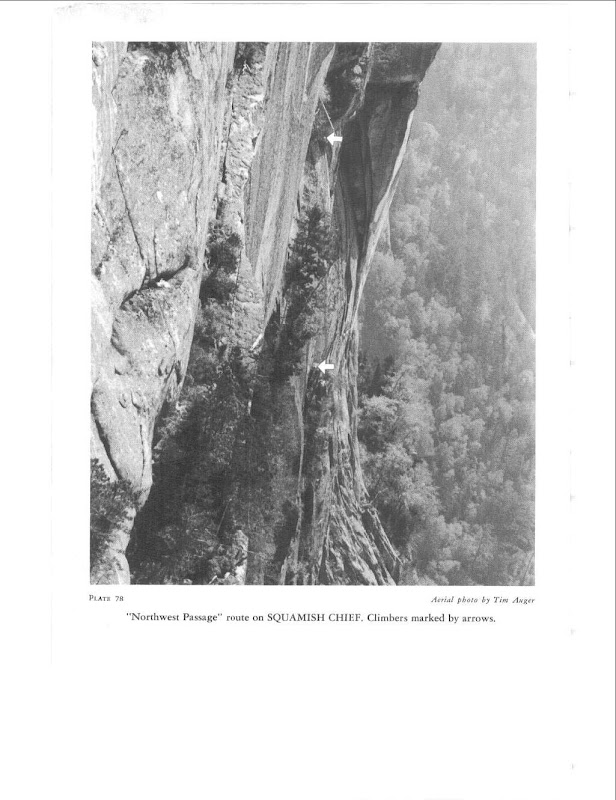 Fabulous - thanks to all who replied. And fear not, I had no ideas whatsoever about a Crap Crags/Europa type deal, more like thinking about strapping on the ol' logger sports pole climbing spikes and belt, a Swami, and a handful of iron pins and seeing how far I could get beore I get sent home crying to mama...
Top

Well, I've managed to track down one reference to "Drifter's Escape" - a one liner citing name, year, and FAers by Anders in his Squamish in the 70's thread on Supertopo, and deduced that Conny and Adam's route is Bald Egos, which received its second ascent by Matt Maddaloni and Susie Beliveau not too long ago, but that's as far as I've been able to get to actually locating the line...

presumably it's just the jungliest line up?
Top

Drifter's Escape is a thin crack (A3 I believe) which forks right out of Wall of Attrition around the arete and onto the headwall.

If you can find the topo of this part of the wall in the drawn-topo Campbell Guide, Bald Egos climbs the Nonwall (left out of U Wall) then up the wall to Drifters before crossing Wall of Attrition and the NW Passage and finishing up on the far right side of the Pan Wall.

NW Passage itself is the huge vegetated corner, left of Wall of Attrition and two corners left of U Wall.
Top

Thought it must be - thanks, as always, Dru, Anders, and all.
Top

Can anybody point me to that giant-sized photo of the chief thread from a year or two ago? Thought I'd bookmarked it, but it seems I didn't, and can't find it through the search function.

It was linked to a special photo app website thingy, and the thread had people spotting climbers on the pic....remember?
Top

woop, finally found it with some more Boolean use. It's called Gigapixel, by the way.
Top
Post Reply
15 posts • Page 1 of 1